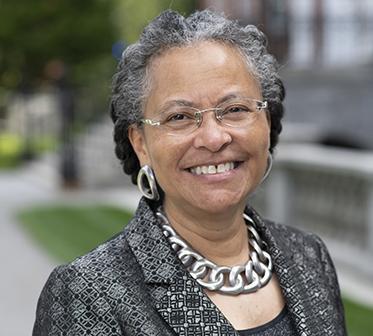 Camara Phyllis Jones, MD, MPH, PhD is a 2019-2020 Radcliffe Fellow at the Radcliffe Institute for Advanced Study at Harvard University.  She is a Past President of the American Public Health Association (2015-2016) and a Senior Fellow at the Satcher Health Leadership Institute and the Cardiovascular Research Institute at the Morehouse School of Medicine.

Dr. Jones is a family physician and epidemiologist whose work focuses on naming, measuring, and addressing the impacts of racism on the health and well-being of the nation.  She seeks to broaden the national health debate to include not only universal access to high quality health care, but also attention to the social determinants of health (including poverty) and the social determinants of equity (including racism).

Dr. Jones is a public health leader valued for her creativity and intellectual agility.

As a social epidemiologist, her work on “race”-associated differences in health outcomes goes beyond simply documenting those differences to vigorously investigating the structural causes of the differences.

As a teacher, her allegories on “race” and racism illuminate topics that are otherwise difficult for many Americans to understand or discuss.  She aims through her work to catalyze a national conversation on racism that will mobilize and engage all Americans in a National Campaign Against Racism.

She has been elected to service on many professional boards, including her current service on the Board of Directors of the DeKalb County (Georgia) Board of Health and the National Board of Public Health Examiners, as well as past service on the Executive Board of the American Public Health Association, the Board of Directors of the American College of Epidemiology, and the Board of Directors of the National Black Women’s Health Project.  She is also actively sought as a contributor to national efforts to eliminate health disparities and achieve health equity, including her current role as a faculty member of the Accreditation Council for Graduate Medical Education’s Pursuing Excellence in the Clinical Learning Environment collaborative addressing Health Care Disparities, and her former role as a Project Advisor and on-screen expert for the groundbreaking film series Unnatural Causes:  Is Inequality Making Us Sick?

Dr. Jones earned her BA in Molecular Biology from Wellesley College, her MD from the Stanford University School of Medicine, and both her Master of Public Health and her PhD in Epidemiology from the Johns Hopkins School of Hygiene and Public Health.  She also completed residency training in General Preventive Medicine at Johns Hopkins and in Family Medicine at the Residency Program in Social Medicine at Montefiore Medical Center.