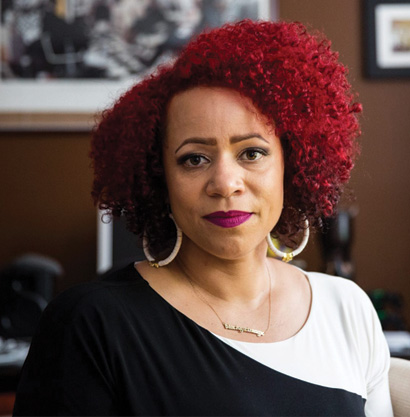 Nikole Hannah-Jones covers racial injustice for The New York Times Magazine, and has spent years chronicling the way official policy has created—and maintains—racial segregation in housing and schools. Her deeply personal reports on the black experience in America offer a compelling case for greater equity.  Hannah-Jones is the creator and lead writer of the New York Times’ major multimedia initiative, “The 1619 Project.” Named for the year the first enslaved Africans arrived in America, the project features an ongoing series of essays and art on the relationship between slavery and everything from social infrastructure and segregation, to music and sugar—all by Black American authors, activists, journalists and more. Hannah-Jones wrote the project’s introductory essay, which ran under the powerful headline ‘Our Democracy’s Founding Ideals Were False When They Were Written. Black Americans Have Fought to Make Them True.’ The essay earned her her first Pulitzer Prize for commentary.

Nothing we know about American life today has been untouched by the legacy of slavery. “The 1619 Project” quickly went viral—the print issue flew off shelves immediately, prompting hundreds of thousands of extra copies of to be printed—spreading its heartbreaking and absolutely essential message worldwide. Random House announced that it will be adapting the project into a graphic novel and four publications for young readers, while also releasing an extended version of the original publication, including more essays, fiction, and poetry. In 2020, Hannah-Jones appeared on The Daily Show with Trevor Noah to discuss the project. And, an impactful ad about the project—a collaboration with Janelle Monáe—debuted at the Oscars just days later. In addition to Hannah-Jones’ Pulitzer, “The 1619 Project” has garnered New York Times Magazine a record-breaking number of finalist nods for the upcoming 2020 National Magazine Awards.

Hannah-Jones has written extensively on the history of racism, school resegregation, and the disarray of hundreds of desegregation orders, as well as the decades-long failure of the federal government to enforce the landmark 1968 Fair Housing Act. She is currently writing a book on school segregation called The Problem We All Live With, to be published on the One World imprint of Penguin/Random House. Her piece “Worlds Apart” in The New York Times Magazine won the National Magazine Award for “journalism that illuminates issues of national importance” as well as the Hillman Prize for Magazine Journalism. In 2016, she was awarded a Peabody Award and George Polk Award for radio reporting for her This American Life story, “The Problem We All Live With.” She was named Journalist of the Year by the National Association of Black Journalists, and was also named to 2019’s The Root 100 as well as Essenece’s Woke 100. Her reporting has also won Deadline Club Awards, Online Journalism Awards, the Sigma Delta Chi Award for Public Service, the Fred M. Hechinger Grand Prize for Distinguished Education Reporting, and  the Emerson College President’s Award for Civic Leadership. In February 2020, she was profiled by ESSENCE as part of their Black History Month series, celebrating “the accomplishments made by those in the past, as well as those paving the way for the future”.

“Nikole has done powerful work exploring the fight for all Americans, especially people of color, to achieve the ‘American Dream.’ Educational and economic opportunities are part of that dream. She used her investigative reporting skills to shine light where it was needed most, and to bring the issues of race and impropriety to the forefront. She is most worthy of NABJ’s highest honor.”
— National Association of Black Journalists President Bob Butler

Hannah-Jones co-founded the Ida B. Wells Society for Investigative Reporting with the goal of increasing the number of reporters and editors of color. She holds a Master of Arts in Mass Communication from the University of North Carolina and earned her BA in History and African-American studies from the University of Notre Dame. For the Institute for Advanced Journalism Studies, she investigated social changes under Raul Castro and the impact of universal healthcare on Cuba’s educational system. She was also selected by the University of Pennsylvania to report on the impact of the Watts Riots for a study marking the 40th anniversary of the Kerner Commission report. Along with The New York Times, her reporting has been featured in ProPublica, The Atlantic Magazine, Huffington Post, Essence Magazine, The Week Magazine, Grist, Politico Magazine, and on Face the Nation, This American Life, NPR, The Tom Joyner Morning Show, MSNBC, C-SPAN, Democracy Now, and radio stations across the country.

All session
by Nikole Hannah-Jones